The art of tube fishing 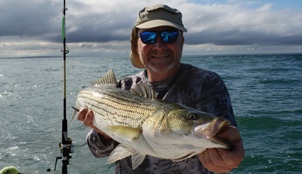 When I have read articles by other authors about surgical tube lure fishing, they are often promoting a specific manufacturer’s ‘wonder lure’ or professing that using one bait on the hook is better than another. I will make a few recommendations along these lines but will concentrate more on why the tubes work and how to use tube lure.

“The Tube lure originated in the 1960’s and was big producer in along the NJ coast when it was brought up to New England. The first tubes were from the John Sakora Company and were of natural color. Fisherman started dying the natural latex different colors in the late 60’s to try to find colors that were more productive.”

Tubes typically work best once the water clarity starts to be reduced as the water warms. This also typically coincides the post-spring migration period when fish starting to live in areas for more than a few days. This year, the tubes started working well in late July and I see this season being typical of most years where I will use tubes from late July – early October.

Some think the tube is an imitation of an eel; but I disagree. Whether I’m using a worm, a piece of pork rind, and/or a chunk of eel on the tail hook, the fish most always eats the tube from behind. Bass typically eat an eel in the middle on their body and vacuum them in. I believe that the tube intimidates the fish into a reaction strike. If there is bait on the tail, this is even better. Give them something to eat!

For years we used worms, but as they got more and more expensive, alternatives had to be found. This period of time was about 15 years ago when we were using a lot of eels in the dark. So, I started cutting up the dead eels into small chunks and put these on the hook. I found that the eel chunk stood up better to the assault of scup and sea bass as well as stayed on the hook when a bass or blue hit the tube and did not get hooked. Eels are also much less expensive. You can fish all day with 3 dead eels which will give you 12-18 chunks.